Flavourful vodkas: A matter of taste

Think vodka is a bland spirit with no flavour? Think again...


Think vodka is a bland spirit with no flavour? Think again...

In 1939, when a little-known vodka called Smirnoff was first sold in the US, it used a memorable – if technically incorrect – strapline: ‘Smirnoff white whiskey: no smell, no taste’. Given that it now sells roughly 25m cases a year around the world, the approach seems to have worked.

To most people, blank neutrality epitomises vodka. It is the chameleon of spirits, an efficient and malleable alcohol delivery system that takes on whatever flavours you throw at it in any number of cocktails or mixed drinks. Until recently in the US, its characterless character was even enshrined in law. By definition, vodka had to be ‘without distinctive character, aroma, taste or colour’.

But there’s always been a part of vodka that eschews the dismissive notion that all vodkas taste the same, because they don’t taste of anything. Russians and Poles would find the idea laughable – and now increasing numbers of people in the western world would agree.

‘You know, I think we are in a golden age for vodka drinkers and connoisseurs,’ says Chico Rosa, Master Distiller at The Oxford Artisan Distillery (TOAD), one of the countless craft operators to have sprung up around the world in recent years. ‘There is more and more emphasis on terroir and flavour in vodka.’

Terroir? In vodka? Really? But when TOAD started making vodka three years ago, it sourced rye grain grown in sandy soils near Oxford; more recently, it switched to rye from clay soils. ‘Now that is something very different,’ says Rosa. ‘It still has the same kind of flavour profile, but the character is definitely not as silky.’

TOAD’s Oxford Rye Organic Vodka happens to use the same raw ingredients (rye, wheat and barley) as Dima’s Vodka from Ukraine – but the two liquids have highly contrasting styles. 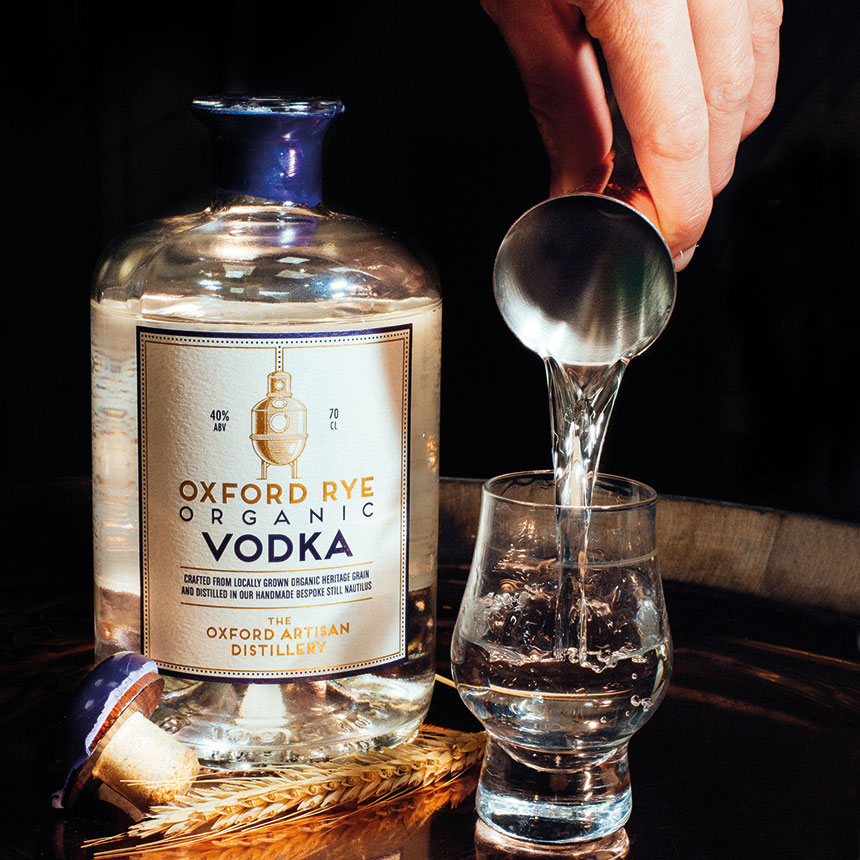 Where Oxford Rye is rich and round, full of cocoa bean and dark chocolate, Dima’s is fresher, zestier, but with rye’s peppery edge. ‘Flavourful but smooth was our overarching aim,’ explains founder Dima Deinega, Ukraine-born, but resident in the UK since the age of five. ‘It took us 38 goes to get it right because we wanted something that was more refined and complex.’

Like TOAD, Dima’s makes great play of its raw ingredients and origins – grains grown in the ultra-fertile black Ukrainian soil called ‘chernozem’, so prized that it is sold by the truckload on the black market.

For Deinega, wheat brings creaminess, rye spice, and barley sweetness, but flavour isn’t his sole concern. ‘What gives spirits flavour?’ he asks rhetorically. ‘Certain impurities. But I still wanted it to be very smooth. I think that’s the challenge to vodka: maintaining its identity, but also adapting and modernising.’

Preserving flavour when making vodka is damned tricky. When you distil something to above 95% abv, you’re eliminating almost all of the impurities that give spirits like whisky so much of their character.

‘With modern distillation technology it is not difficult to strip away all the character of the base material and leave only alcohol and water to create a neutral vodka,’ says Mike Foster, global brand ambassador for Belvedere. ‘Our distillers at Belvedere are hugely experienced in managing the slow fermentation and the four-column distillation process to ensure that we create and retain all the congeners that we need, and remove the ones that we don’t.’

That’s vital if, like Belvedere, your ultimate aim is to showcase the dimensions and nuances of flavour present in your raw ingredients – in this case, Polish Diamond Dankowskie rye. Similarly, Dima’s uses the expertise of the 125-year-old Zhytomyr distillery in Ukraine, while TOAD’s bespoke stills and gentle, whole-grain production process have a laser focus on keeping flavour in. ‘Terroir in a spirit is not only the base, or where the base was grown, but also the still and the people who worked with the ingredients, and the distillers,’ says Rosa. 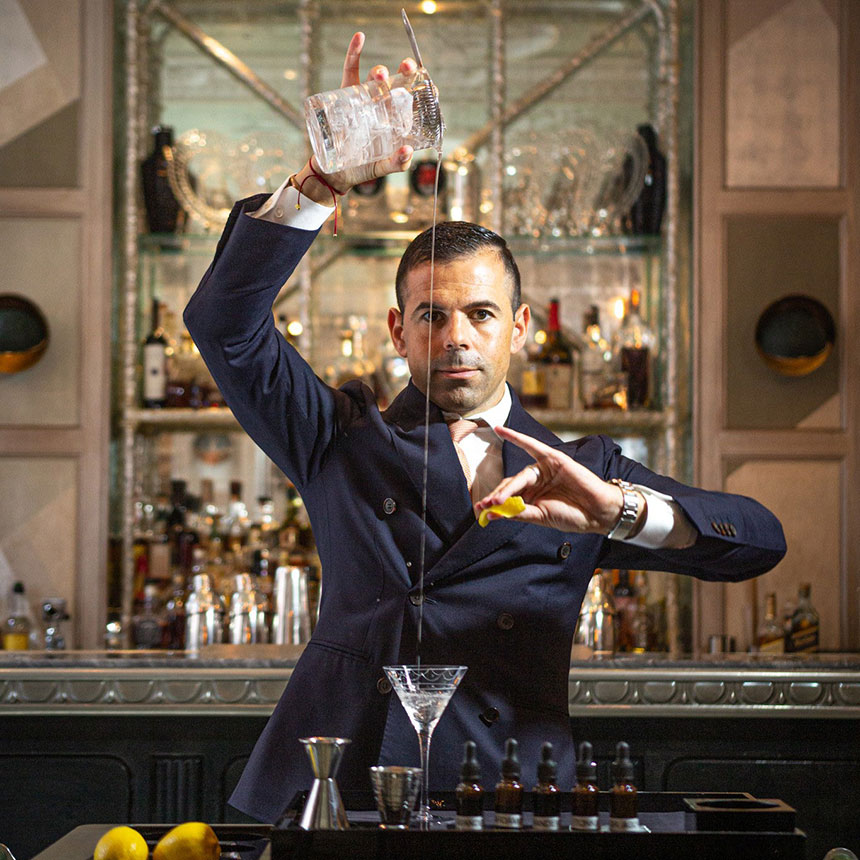 Let’s not go crazy here: this is still vodka, after all, and the flavour variations remain nuanced and subtle compared to a gin or a single malt. ‘But if you train your palate and keep tasting, tasting, tasting, you can feel the difference between one vodka and another,’ says Ago Perrone, director of mixology at The Connaught Bar in London’s Mayfair. ‘It might take longer than for Scotch whisky or bourbon, but with vodka there is a real sense of discovery.’

For Perrone, you have to start with neat vodka, served at room temperature. ‘Smell it, taste it, feel the texture,’ he says. The texture – that underrated aspect of any fine spirit – is especially important.

‘The Martini is really a hero serve to allow the palate to enjoy all the flavours that vodka has, but you want a vodka that can really hold the dilution,’ Perrone explains. ‘If it gets too watery, you can lose the flavour. Texture is key, because texture allows the flavours to stick on the palate – just think of full-bodied versus light-bodied wines.’

In a gin-obsessed world, the right vodka can offer an understated counterpoint, especially if you’re a Martini fan. ‘Vodka is gentle and elegant, and is perfect when the palate doesn’t want too many competing flavours,’ says Perrone. ‘Vodka creates flavours that other spirits just can’t.’

No smell, no taste? No chance.

The style vodka that broke America has been elevated here with winter wheat from a single estate and a second distillation in a 100-year-old column still. Elyx retains the Swedish mother brand’s unctuous character, with notes of clean cereal, white pepper and a touch of Madagascan vanilla. The finish is dry and slightly nutty. Alc 42.3%

Poland’s Belvedere has taken vodka provenance to a new level with its single estate expressions. This uses rye grown in the Masurian Lake District, where long, snowy winters help create an elegant, crisp and precise vodka, with a grassy undertone and a hint of menthol. Perfect Martini material. Alc 40%

The second of Belvedere’s single estate tag-team hails from a village in western Poland surrounded by vast forests. Long summers make for a much more robust and forward style, with plenty of spice and pep. A sipper that’s also good for stronger, stirred-down cocktail creations. Alc 40%

William Chase invested some of the proceeds from selling his British Tyrrells crisps business into a new distillery – which has now also been sold to spirits giant Diageo. Beyond the dealmaking, this is an ultra-smooth and rounded potato vodka with a pleasing touch of butter and vanilla. A taste of Poland – from Herefordshire. Alc 40%

A Ukrainian mix of rye, wheat and barley brings a creamy, silky texture and a grassy, balanced style with bright, vanilla-accented fruit and some gentle spice and pepper. Good with cheese and charcuterie or, in true Ukrainian style, a selection of pickles. The local toast? ‘Budmo!’ Alc 40%

The Scottish Glenrinnes distillery sounds like it should be making whisky, and indeed it lies in the heartland of single malt – but instead focuses on gin and vodka: organic barley and wheat, a two-stage fermentation process and a rich, sweet distillate with lots of caramel, a hint of black banana and a pleasing edge of pepper. Alc 42%

French vodka Grey Goose took its name from a defunct German wine sold in the US – but that didn’t stop it from pioneering the luxury vodka boom of the noughties. Picardie winter wheat, distillation in the Cognac region, and a sharply zesty character rounded out by notes of coconut and cream, with just a pinch of balancing anis. Alc 40%

Ago Perrone has been serving this Polish vodka at The Connaught Bar in London for 12 years, and is a big fan. It combines the spiciness of rye with the creamy texture of wheat, plus – unusually – spelt, which brings a bready character. Complexity and balance make this a versatile cocktail base, but it’s also great neat, frozen or on the rocks. Alc 40%

Chocolate! This rye-heavy spirit (with wheat and barley) has an alluring nose of cocoa bean and dark chocolate, while gentle handling at the distillery keeps a bright, fruity note and the herbal undertone of rye. Rounded and silky – and absolutely brimming with character. Alc 40%

From the Mugello region of northern Tuscany, VKA uses organic wheat to deliver a mineral-accented, softly sweet distillate with a whisper of pine resin. It’s clean and pin-sharp on the finish, making it a great, toned-down aquavit substitute alongside raw fish and crustaceans. Alc 40%

Best vodkas for a Bloody Mary