Riedel: An exclusive look behind the scenes

It’s a name that’s as well known in the world of top-quality wine as any of the grands crus...


It’s a name that’s as well known in the world of top-quality wine as any of the grands crus...

Think of an object that’s made today as it was 3,000 years ago – the list wouldn’t be long. It may include the production of paper, a rudimentary pen perhaps, a block of cement even. But the humble glass could happily sit at the top. Arguably a fundamental part of wine enjoyment, the wine glass itself has of course evolved over time, but the initial recipe, perfected by the ancient Egyptians, Romans and Persians, has hardly changed.

Glass production has evolved, but it is only in the last 50 years that wine glasses have become both aesthetic and epicurean, style and substance, form and functionality – elevated from a utilitarian object to one deemed essential for wine lovers everywhere.

‘Stemware is crucial to the overall sensory enjoyment of wine,’ believes Amanda Wassmer-Bulgin, former Bilanz Sommelier of the Year and current wine director at the 5-star Grand Resort Bad Ragaz Quellenhof in Switzerland. ‘A prime example is Champagne. All the hard work that goes into achieving layers of complex aroma can be thrown away in seconds by the use of a small, narrow glass. All you get is a one-dimensional character.’

The wine glass revolution can be wholly credited to one family – the Riedels – but more specifically to three members: the current and previous two generations, who initiated an entire industry and continue in its influence today.

First it was Claus Josef Riedel, born 1925, the ninth-generation founder of Riedel’s current headquarters in Kufstein, Austria and the inventor of the modern-day egg-shaped glass. Not only did he produce a design which has been the basis for every wine glass since, but he went on to launch his masterpiece Sommeliers range, which fundamentally changed the appearance of stemware in accordance with the character of a wine.

Claus’ son Georg J Riedel, the Decanter Hall of Fame Award winner in 1996, developed this one stage further, creating the first grape varietal-specific concept. Working alongside winemakers including Robert Mondavi and Angelo Gaja, Georg brought the Vinum series and with it a new drinking mentality to a global audience. His son, 11th-generation Maximilian J Riedel, continues the innovation today, driving the company’s commitment to quality.

The revolutionary stemless ‘O’ series launched in 2004, and was followed by the hospitality trade-focused Restaurant and Sommeliers Restaurant ranges. 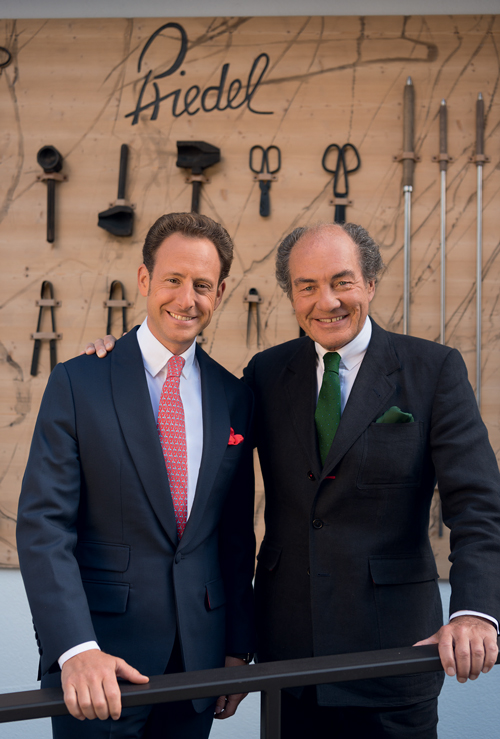 Scientifically speaking, glass is composed of formers, fluxes and stabilisers, which each work to affect the mechanical, electrical, chemical, optical and thermal properties of the glass that is produced.

Formers make up the largest percentage, in the case of Riedel, white silica (silicon dioxide), commonly found in nature as quartz and the major constituent of sand. Soda (sodium carbonate) and potash (potassium carbonate) are common fluxes, needed to lower the high temperature at which silica melts, around 2,000°C. Stabilisers are used to ensure the glass is strong and water-resistant, with lime (calcium oxide) a popular choice.

The highest-quality quartz sand is found in Bavaria in southern Germany, but the exact chemical composition used at Riedel – the best-known supplier of specialist glassware with an empire unmatched by its competition in either size or stature – is kept secret and known only by a handful of experts among its 500 staff; a tall task when each glass will be tested for its brightness and crystal clarity.

Once the mixture has been through a rigorous washing, fining and filtering process, it is transported as pellets to either a machine-pressed or mouth-blown glassmaking facility, ready to be melted.

The Riedel philosophy centres on the ‘architecture of a glass’. For stemware, this means the proportions between the bowl, stem and base; taking into account individual grape varieties, it includes the shape, size and rim diameter of the bowl, each working in harmony to ‘translate the message of wine’ and be its ‘loudspeaker’.

There are more than 150 different glasses to choose from – just for wine that is, not to mention a large list of client commissions counting Champagnes Krug and Dom Pérignon among them, or the 50-plus decanters in the company’s repertoire. There are also separate spirits and water ranges, and individual glasses for Coca-Cola and Nespresso.

From table wines to grands crus, there’s a ‘varietal specific’ or ‘wine friendly’ glass for it. There’s a Brunello di Montalcino glass, and 12 Riesling glasses, the latest being one of the largest glasses Riedel has made. Why? To factor in aesthetics, the evolution of wine styles, overall improvement in quality and because of climate change. ‘Wines are becoming more fruit-forward, more concentrated and higher in alcohol, and because of this our glasses grow in size,’ says Maximilian. Each one is conceptualised, designed, prototyped and tested in-house before being released.

Winemakers are a key part of the process, joining multiple tasting sessions to decide on ‘the’ glass; and thousands of one-on-one Riedel tasting seminars around the world conclude that bouquet, texture, taste and flavour are all influenced positively or negatively by the shape of different glasses. ‘It’s the best way to sell,’ Maximilan says. ‘This, “wow, I can’t believe the difference” moment’.

However, Wassmer-Bulgin argues that there’s no need for ‘millions of glasses’, highlighting Riedel’s Chianti Classico glass as a good all-rounder – coincidentally, the same type that Decanter uses at all its Fine Wine Encounter events, for the Decanter World Wine Awards judging and for in-house tastings. She adds that a ‘small, concise number avoids confusion and excessive costs’.

In the same vein, prominent critic Jancis Robinson MW launched her ‘one glass for all wines’ in 2018 as a ‘practical option’, and other ‘universal’ wine glasses are also available on the market.

For Maximilian, this notion is ‘impossible’ because of the complexity of grapes. He says ‘whoever claims it works either lies or has no clue about wine’. It’s the same with shoes or professional sports equipment, he says: ‘One pair doesn’t suit every occasion, the same as you can’t play 18 holes with one golf club.’

Whether you’re a convert on not, it’s hard to argue with an industry worth an estimated US$1bn and growing. And it’s not just the glasses that Riedel develops – it also invests heavily in creating the proprietary technology to manufacture them. 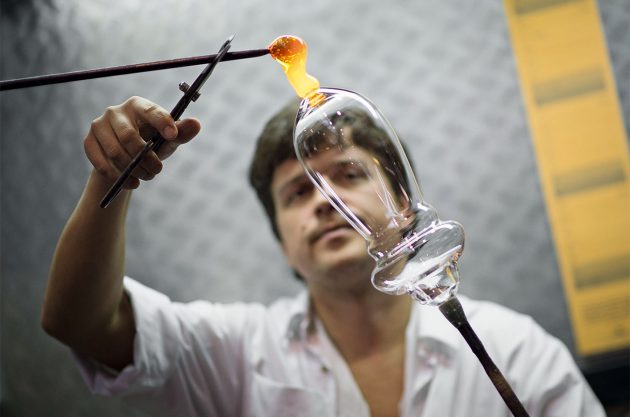 From machines that can flawlessly mimic a mouth-blown bowl in five-and-a-half seconds, and a decanter in less than 15 seconds, to hand-crafted decanters that imitate the effects of double decanting in minutes, every step is not only meticulous, but efficient.

Riedel’s Kufstein headquarters, nestled among the mist-topped Tyrol mountains close to the German border, is the company’s ‘heart and soul’, Maximilian told me during a visit earlier this year.

Open to some 20,000 visitors annually, it houses a historic glass museum, sensory experience and well-stocked outlet, as well as Riedel’s artisanal factory – or should I say, incredibly hot and large workshop warehouse. It is here that master glassmakers take molten glass from nine blazing furnaces, each firing at around 1,200°C, and expertly craft small works of art in less than half the time it takes to boil a kettle. 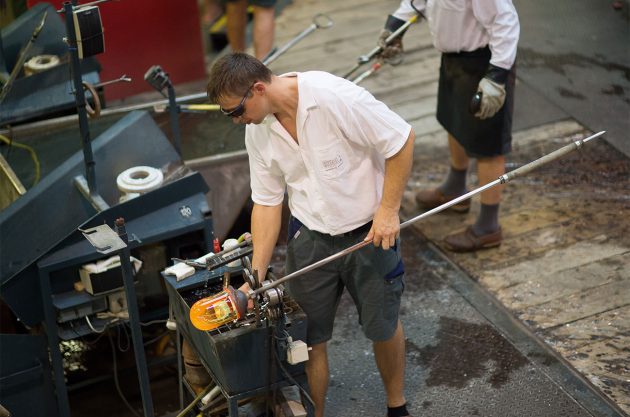 Hand-crafting the bowl of a glass. Credit: Riedel.

Working in a fierce 45°C heat and clad in white t-shirts, shorts and protective shoes, some also sporting sunglasses, the highly skilled teams from countries with long histories of glassmaking – including Slovakia, Slovenia and the Czech Republic – work quickly and seamlessly to lift, cut, blow, mould and shape each glass and decanter before transferring them to an ‘annealing lehr’ oven to temper – a lengthy process in which freshly manufactured glass is strengthened by being slowly cooled to relieve the internal stresses.

While this skill is understandably cherished, Maximilian admits it is a ‘tough environment’ and, with the closure of historic glass teaching schools in neighbouring countries, there is a risk that this ‘breed of artists is going to vanish if times continue to change’.

Given the necessary workforce and tools, and considering production time (about 2,000 pieces are made daily), hand-blown items cost up to five times more than their machine-made counterparts and as such represent less than 5% of Riedel’s total output.

Machine-manufacture facilities in Weiden and Amberg in Germany handle the remaining production, the latter for the Riedel O and Restaurant ranges, in addition to the Spiegelau and Nachtmann lines which were bought into the company fold in 2004. In Weiden, pre-Covid, they were running 24 hours a day, seven days a week, somewhat noisily – pouring, shaping, cutting, polishing, cleaning and tempering. Each item is then physically inspected and hand-packaged, bringing the total number of processes to about 15, with six separate quality-control steps along the way.

Air pressure and filtered water are crucial in the lubrication and cushioning of the glass as it’s shaped in the heavy-duty moulds specific to each style. Production changes every few days, with the hundreds of moulds not in use stored neatly in rows until needed; it takes eight weeks to make a set of the moulds, which comprise 15-20 pieces and cost between £10,000-£15,000. Riedel’s glass production runs at a quality ratio of 60/40, with 40% of good material being recycled back through the system – a necessary sacrifice that ensures standards and a consistent and constant supply of high-quality material.

The factory processes 50 tonnes of glass a day, enough to make 10,000-15,000 pieces. Once packaged, approximately one million units await despatch in the enormous storage room. 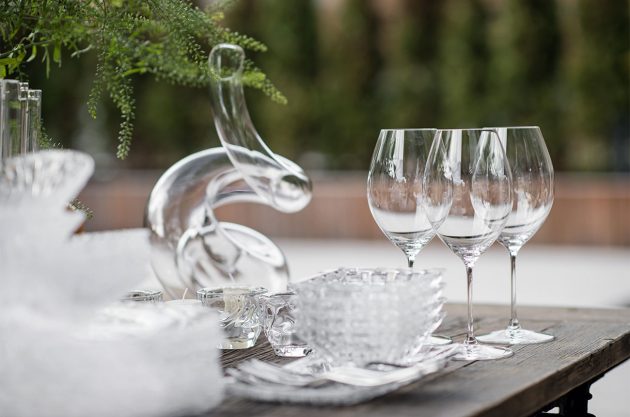 Machines now work so effectively that the only tell-tale signs of a handmade glass are on the base; firstly and most evidently the logo is different, and secondly there are tiny, almost imperceptible ripples in the base of hand-blown glasses visible when held at a certain angle.

While the mouth-blowing process retains a crucial advantage in allowing for the bending of the rim to capture aromas – a feat that’s impossible to do with a machine plunger that shapes and presses the final form – the limitations of machine-made glassware are lessening. ‘Sooner or later machines will replace craftsmanship,’ Maximilian believes.

Price comparisons put a handmade High Performance Pinot Noir glass at £110, while the machine-made Performance Pinot Noir comes in at £22.50 when bought in a pair. You may not want to pay extra for the ‘iconic light optic impact’ said to deliver a perfect ‘performance’, or the extra 8cm stem height – but there is something unique about watching the process and then handling the exquisitely handcrafted final result.

‘Wine is a luxury,’ Maximilian emphasises. ‘You don’t need it to stay alive.’ Never has this been more apt, given the current climate, but studies have found that people are drinking more at home and better-quality wines. ‘It is still an investment: if you like drinking quality wines, you need a glass that will best unlock the flavours, it’s as simple as that.’