What is Cognac? Cognac is a type of brandy – a distilled spirit made from grapes – produced exclusively in a region of western France that’s strictly regulated by a GI (geographical indication). The Cognac-making process involves harvesting white grapes, making wine, distilling that wine twice, then maturing it in oak barrels for at least […]


What is Cognac? Cognac is a type of brandy – a distilled spirit made from grapes – produced exclusively in a region of western France that’s strictly regulated by a GI (geographical indication). The Cognac-making process involves harvesting white grapes, making wine, distilling that wine twice, then maturing it in oak barrels for at least […]

Cognac is a type of brandy – a distilled spirit made from grapes – produced exclusively in a region of western France that’s strictly regulated by a GI (geographical indication).

The Cognac-making process involves harvesting white grapes, making wine, distilling that wine twice, then maturing it in oak barrels for at least two years – often for much longer.

Most Cognacs are blends, created by combining the distilled spirits – known as eaux-de-vie – of different ages and from different origins. Classifications range from the youngest (VS) to older expressions such as VSOP and XO.

More than 200 million bottles of Cognac are sold every year, 98% of them outside France. Cognac is a versatile spirit that can be consumed in simple mixed drinks, in an array of cocktails, or sipped on its own.

Where is Cognac made?

There are about 78,000ha of vineyards in Cognac, stretching from just above Bordeaux to as far north as La Rochelle, and eastwards from the Atlantic to beyond Angoulême. The vineyards are split into six zones or crus:

What grape varieties go into Cognac?

There are six permitted grape varieties in Cognac:

How is Cognac made?

The harvest – usually carried out by machine – lasts from about mid-September to mid-October, with conventional vinification giving a highly acidic wine of around 9% abv. No sugar or sulphites can be added.

This must be completed by 31 March following the harvest, and comprises a small-batch, double distillation in a Charentais copper pot still. Some producers distil ‘on the lees’, including the dead yeast and pulp from the winemaking process, to give a more complex spirit character.

The process is as follows:

Cognac must be matured in oak barrels for at least two years prior to release, but is often aged for much longer. Many factors influence the character of the maturing eau-de-vie, including:

The vast majority of Cognacs are blends, composed by the cellar master from eaux-de-vie of various ages and origins to create a Cognac that is balanced, complex and consistent. Distilled water is added to dilute to the desired strength, which is usually 40% abv.

Cognac must be matured for at least two years before bottling, and must have a strength of at least 40% abv. Classifications include:

Other classifications are as follows:

Vintage Cognacs – bottled by specialists such as Hine, Frapin and Delamain – must be 100% from the year named.

How to drink Cognac

Most Cognac in the world is drunk mixed – with water, over ice, or with mixers including soda, lemonade and cola.

Cognac also has a long heritage in cocktails, with classics including the Sidecar, Vieux Carré and Horse’s Neck.

The finer Cognacs – XO and above, plus vintages – are usually consumed neat to fully appreciate their complexity and character. A stemmed tulip-shaped glass is the best vessel from which to savour Cognac’s aromas and flavours. 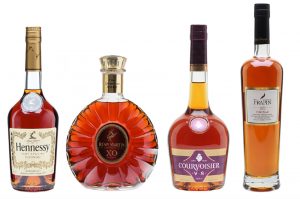 The largest producer by far. It has a rich, sometimes woody style, ascending from VS through VSOP and XO to high-end expressions such as Paradis and Richard Hennessy.

Tending towards purity and fruit expression, thanks to Martell’s insistence on distilling clear wines only. Traditionally a user of the small Borderies cru.

Exclusively sources from Grande and Petite Champagne, specialising in VSOP and above. Also makes the high-end Louis XIII expressions.

A maker of Cognacs of finesse and balance. Headquartered in Jarnac, with an historic association with Napoleon.

Prized for its elegant, fine style. A vintage specialist – look out for Jarnac-matured and ‘early-landed’ (aged in the UK) bottlings from the same year.

Makes and ages all its Cognacs from its own vineyards. Another bottler of vintages, and single-estate Cognacs from Château de Fontpinot.

Has a broad range of expressions, including provenance-rich bottlings from the Ile de Ré off the Atlantic coast.

Has a stellar reputation for high-end blends and single vintages, with a supple, complex style that allows the distillate to shine through.